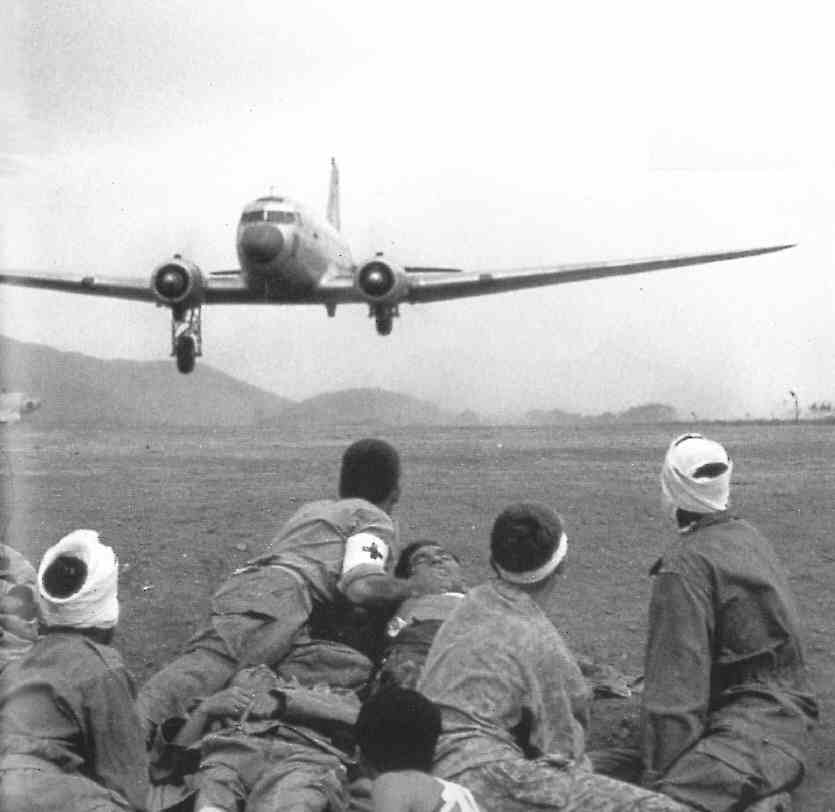 C-47’s Last Flight out of Hell, Dien Bien Phu, Vietnam 1954.
With the defeat of the French troops coming to a fatal close in April 1954, almost 70 Douglas C-47s made overtime to fly in and out of the besieged Army camp Dien Bien Phu. Bringing in food, ammo and medical supplies, on the way out they flew to the South hundreds of wounded soldiers from this Jungle Hell in the Western mountains of Northern Vietnam. It was an airstrip built by the Japanese during WWII and was selected in 1953 by the French Army as a stronghold against the advancing nationalist Viet Minh forces under the legendary General Giap, who challenged the Colonial rule of the French after the Jap defeat.

It will remain forever a disputable decision as to why the French, under pression in the North, opted to occupy such remote venue in the heart of enemy ruled territory that could only by supplied with long flights. Moreover the place had no real strategic value in that mountainous outback. Once the field was occupied by French airborne troops, the battle that laid ahead  must have taken the French by total surprise, mainly due to what the enemy could deploy as counter force. With 50.000 troops, the Viet Minh army dug in on the surrounding hills that overlooked the lower situated French camp. A bad starter but worse, the Vietnamese had done the impossible by transporting over 300 km their heavy artillery, howitzers and guns for their final assault on the well defended camp. French Artillery with 105mm howitzers and 155mm guns was not able to neutralize the hidden enemy firepower. The daily supply flights of the Dakotas that came in to pick up the wounded were soon made impossible as the Vietnamese activated their Russian made AA 37mm guns from the surrounding hills. The C-47’s last flight out came under heavy attack from guns and AA fire and that must have been a most harrowing flight for all on board, but they made it as the epic “Last flight out of Hell”.
From there, the supply to the French could only be done with para/ammo droppings by 50+ C-47’s and 12 C-119’s Flying Boxcars. But every day, the Drop zone became smaller and the pressure higher on the originally 30.000 French troops consisting of Army, Legionnaires, Paratroopers and Colonial Forces from North Africa as well as French Vietnamese soldiers and local T’ai Tribal forces.
By the 7th of May 1954, the camp was overrun by the Viet Minh troops. To the dismay of the Western World, almost 12.000 French troops were captured after the surrender: they made the ‘Walk of Shame’ over 300 km and most of them never returned from that agony. The first Indo-China War had come to its finale and brought an end to 100 years of French Colonial Rule in SE Asia. As the world thought that peace had finally settled in this region, the second Indo-China War was only just about to begin.  That was the conflict which dragged the USA in, and that war would finally end only 20 years later, with a  “peace” treaty signed in 1975 in Paris.  In both conflicts, the WWII workhorse C-47 would play an interesting role, described in my book. Most of the surviving USAF C-47’s were flown in 1975 to Thailand , and joined the Thai Air Forces for many more years.  As they came to their final act to be buried in a sea grave, the Dakota Hunter came on their way and had a most intriguing confrontation with the aircraft and their self proclaimed owners.  Read my chapter Thailand; Sinking the Dakotas! 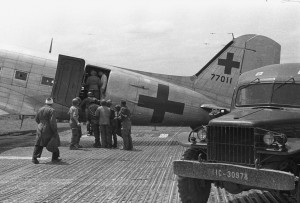